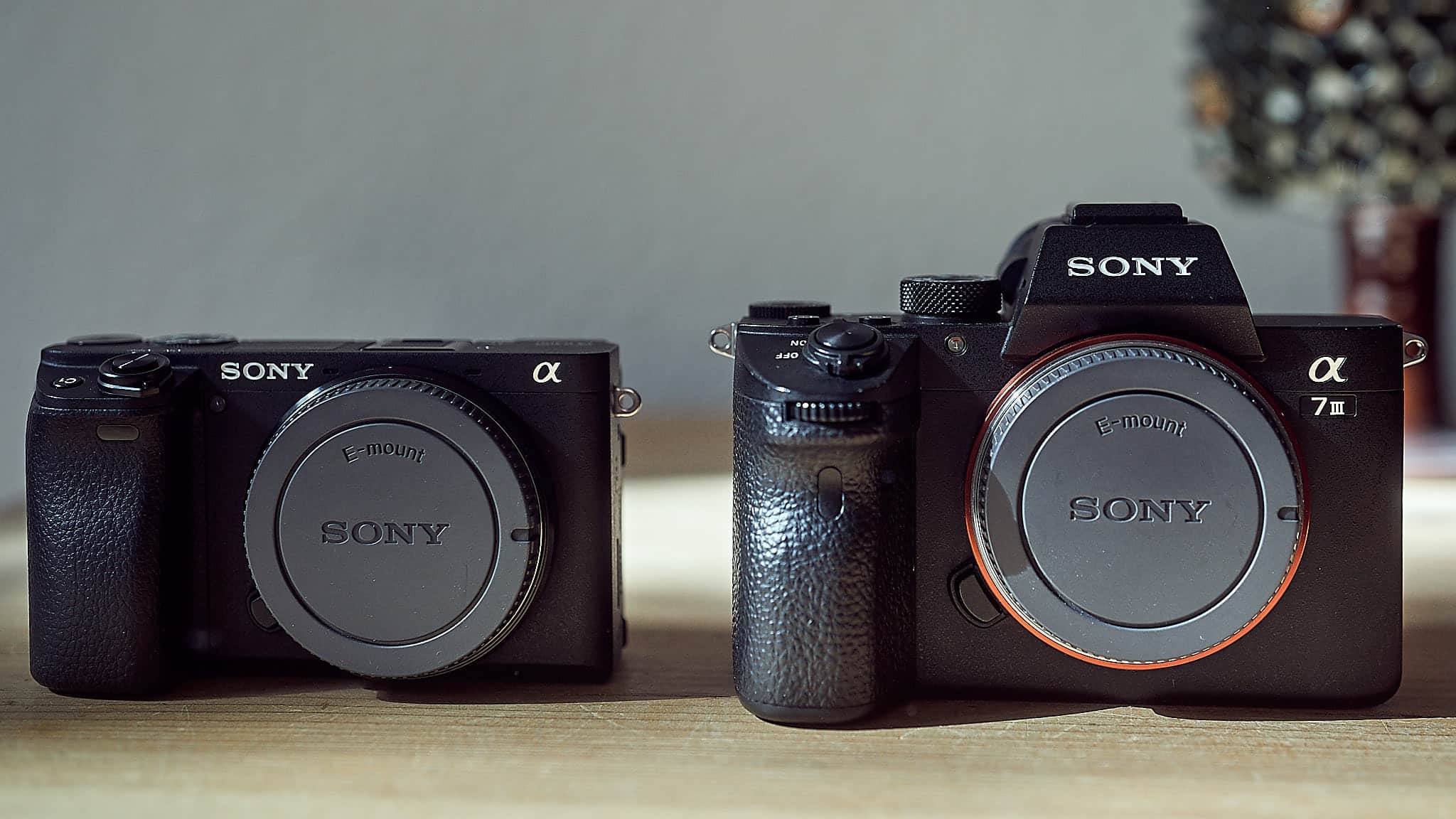 The Sony A6400 with it's bigger brother A7III
Home
hardware

Sony A6400 – a crop camera! No full format! Is there an application for such a camera at all? Is it possible to take photos with this sensor size even though it doesn’t say Fuji on it? Is this worth a blog post?

Before I recently upgraded to the Sony A6400, I was looking for a small camera for the jacket pocket for a long time. Coming from Fuji which I couldn’t handle, the Ricoh GRIII did not meet my expectations and then I saw the Sony A6400 for the same price. I have never informed me with this line of Sony, but the A6400 fit my requirements because of the size and the new autofocus. In addition, thanks to the same bayonet, I can also use my full-format lenses. In principle, the A6400 is to the A7III, as with Nikon the D500 to the D5. However, the A6400 weighs with no lens, but ready to use, just 400g. There must be a lot of liposuctions for the D500, in order to get that …

So I stood suddenly at the sales counter and exchanged my much too rarely used Mamiya 7II for the A6400 – and got additionally 1000€ transferred to my company account.

Now my grin could hardly be bigger after this exchange, but what I experienced than with the camera fascinated me several times!

The new real-time tracking autofocus of the A6400 –  is since this Monday in the A9 (there even with animal eyes AF) – is absolutely amazing. (Edit: Thanks to Sven for pointing out to me that I misinterpreted the press release from Sony regarding the implementation in the A7 models.) I have never before worked with such an intuitive and smooth AF. Sony has been the measure of all things in the mirrorless area before (and I’ve really tried a lot of cameras) and they have upped their game again now. There are two reasons for this: the AF simply remains on the object I am aiming at. Here is an example from the game FC St. Pauli against HSV (I had bought the camera the day before and immediately got my money’s worth.)

The autofocus clings as good as it can to what you are aiming at. So it’s really quick to focus on eyes. Even closed ones. The camera remains the focus even between many other people as you can see in the example pictures.

In addition to the grandiose autofocus, the AF tracks its object almost over the entire sensor size. Until now, this was the biggest problem with the mirrorless cameras. Nikon introduced something like this about 10 years ago with 3D AF for DSLRs in the Nikon D3. In 2010, I already showed this in a blog post here.This technology was only available with the Sony A9 for mirrorless cameras with corresponding reliability. And now in the A6400 at a fraction of the price. The big advantage is that I can swivel the camera effortlessly and optimize my image composition once I have focused the AF on the subject that interests me.

Here is an example from my job at Mipim in Cannes. The special thing about the picture is its creation. In order to be able to photograph the picture in this way, I had to hold my camera with a long arm around a steel column near a glass pane. On the display, I checked the detail of the picture and relied on the fact that the eye AF does not let the eyes of Mr Bruns-Berentelg (second from left) out of sight (SCNR). Looking past the camera, I observed the scenery and waited for something to happen in the picture. An opportunity presented itself when he exchanged business cards with someone else.

The autofocus alone justifies the purchase of the small camera. The pleasant thing about it is that the AF simply works. Until now, I had to adjust the type of focus field for different types of subjects. In many cases, the camera does this automatically. Eye, face, back of the head – the AF takes what it can get and records it with very high accuracy.

Normally that’s a weak spot of that small sensors. Even with this camera? Just have a look. Shortly before sunset, I took the following picture in the shade of the Hagenbeck trees – an animal park in Hamburg.

The picture was taken with ISO6400. You can see the quality well in the magnification. Yes, you see noise, but I find that absolutely acceptable for the small sensor at ISO6400.

The cover picture of the article suggests this. Well, I wouldn’t go that far. The AF will soon be retrofitted to the A7III. Also, the Sony A6400 has only one memory card slot and a relatively small battery. I haven’t counted the number of pictures I am able to take with one charged battery. Roughly, I’d say I can take photos for a full football match with half of the charge of the A7III battery. In comparison, I usually need a second battery when I am using the A6400 to photograph a game. Besides that, the camera is not as weatherproof as professional cameras (a weak point of Sony equipment anyways, but I am still using the cameras in the pouring rain at the Millerntor stadium)

The A6400 has no stabilization in the camera (called IBIS). That’s no problem for me because there are lenses with stabilization as well – you can recognize them by the abbreviation OSS. Of course, I’d like to show you an example of this as well. The used 560mm is actually 840mm due to the crop factor of the sensor. There is the well-known rule of thumb that sharp images are only possible with an exposure time shorter than the reciprocal of the length of the focal length. However, here is the proof of the contrary taken with 1/200s – round about 2 f stops longer than the rule suggests:

Good, that’s no performance of the A6400, but still works surprisingly well.

Lack of depth of field due to small sensor

There are very good lenses available for the A6400 because the series is not new. The Sigma 16mm f / 1.4 *, Sony 24mm f / 1.8 *, 35mm f / 1.8 *, 50mm f / 1.8 *are some of the eye-catching lenses, all of which allow for beautiful crop factor free exposures. (Profitipp: always one step closer than you actually want.) The 35 and 50 also have a built-in image stabilizer. Only the 24 is quite expensive, alternatively you can take the 28mm f/2. This full frame lens fits – like all full frame lenses for Sony E-Mount – also on this camera. For me this was one of the reasons for buying this camera because I already own several lenses for my A7(R)III.

Is there nothing else to complain about?

Of course, but only for people like me who take pictures with the left eye. One of my favorite features on the full-frame Sony is the ability to move the AF point across the display as I look through the viewfinder. If you don’t know this option yet: I’m looking through the viewfinder and with the thumb of my left hand, I’m stroking across the screen and moving the focus point. This is much better for left-eyed photographer than the cursor on the right side. Even if I then need two hands on the body, it is still more comfortable because otherwise I always have my thumb in my right eye when operating the cursor.

Now the problem with the A6400: it is too small! If I move the focus point looking through the viewfinder, I regularly move the focus point to the upper right corner with my nose. Fortunately, I act according to an old photography proverb: ‘Photographing means solving problems’. Interestingly, on the Sony A6400 I can use my right thumb to operate the four-way rocker without getting in the way of my right eye. It also helps that the autofocus works so well, as mentioned above. It’s actually really fast to use the middle AF point for aiming and then pan the camera.

My conclusion to the Sony A6400

The Sony A6400 * is a technical masterpiece that makes taking pictures a lot of fun. If you’re looking for a small camera that has extraordinary autofocus and you’re not planning your shootings in the pouring rain all the time, the A6400 is the right choice for you. You should consider that the focal length extension is not something that will bother you but instead might come in handy – e.g. if you are interested in sports or wildlife photography. With the exception of the missing IBIS and the lack of a second card slot, practically everything works as with the big Sony. I have assigned the buttons on the A6400 so that I can photographs with one hand. Very pleasant at parties when you have a beer in the other hand. The folding display allows selfies very well; therefore, with the Sony A6400, you’ll be the hero of your next Instagram story…

The asterisk * indicates that this is an affiliate link to Amazon – if you buy after the link click costs you no more cent and I get a small commission. If you like my work you may buy me a virtual coffee at Ko-Fi. I’ll appreciate this!