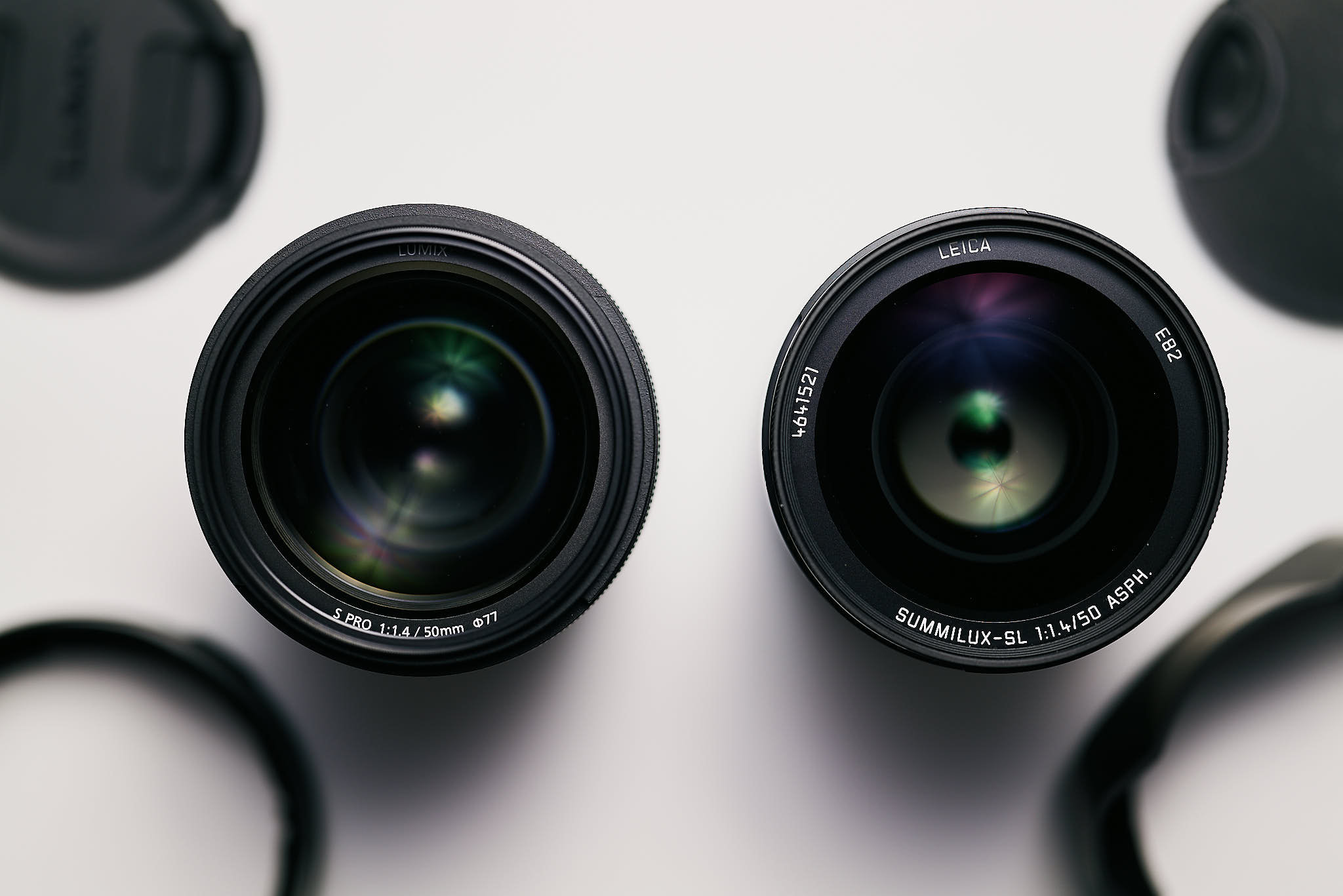 I could have chosen “Is twice as expensive twice as good?” as the title, but would you have clicked in here then? So what is it about It’s about 50mm lenses. These are called normal lenses in the 35 mm range because they are relatively close to the diagonal of the image sensor and therefore represent the photographed image normally. They are considered unspectacular lenses. That’s why I like this focal length so much, because it doesn’t need to be gimmicky in environmental portraits and makes the person look very natural in the room.

And what’s with the price in the title? I did a comparison test and compared three 50 millimeter focal lengths for the L bayonet from Leica SL, Panasonic S and Sigma fp cameras. Interestingly, one lens is always twice as expensive as the other. And each one is considered a very good lens in its own right.

Why did I do this? Because usually, comparative tests are aimed at measurable things like sharpness or vignetting. The latter is rather uninteresting because lens corrections can very well calculate this out. Sharpness is essential, of course, but all lens manufacturers are now capable of sharpness. Much more exciting is how lenses manage the transition from sharpness to blurriness. Or how a bokeh looks. But that is hardly measurable. Therefore, from my perspective, it is better to photograph the same thing with different lenses and then see how they look. More on that in a moment …

I compared the following lenses:

The latter is really just there for fun and to drive up the total amount of lenses for the title. The result is still exciting …

First, however, a brief look at why sharpness alone is of little help in assessing a lens. Look at the three pictures – they heavily cut out parts of one big shot. The photos were taken with a Leica SL2, i.e. with a 47MP sensor. The difference in sharpness is marginal. Or?

Can you see which picture was taken with which lens? If you know where to look, you can at least recognise the Noctilux – but it’s not because of the sharpness. Below is the complete scenery. You can see the bottles in the lower centre. So the magnification is enormous.

By the way, the bar is a lovely location down by the fish auction halls. And ideal for a test of how the lenses draw. All I have to do is go around the left corner to the right. And already, I see an excellent perspective, as I show it here in the examples below. I deliberately focused on a point in the middle of the room.

I can easily conjure up a beautiful bokeh even with lenses with a smaller open aperture if I get relatively close to the actual subject. I only need a lens with f1.4 if I can’t create this proximity but still need a crop. (Luminous intensity aside.) The focus range of a 50mm lens at f1.4 lens is about the same as at 5m distance as with an f4 lens and 3m. (Moreover, Leica has proven with the Summaron 28mm f/5.6 that even such optics can produce a 3D effect and crop .) Back to the example that I photographed through the glass, of course, which is why the lens hood partly allows other reflections at the edges of the image.

OK, it is immediately noticeable that the 50mm on the Noctilux is probably a little more than 50mm because the image section is a little narrower. What else? Yes, the chains from the ceiling are in different places – the location is on a floating pontoon. I hope we can all have a drink there again and then know that the swaying is not due to alcohol 😉

Back to the photo: do you see the differences? I’m assuming you can’t tell the difference at this size. Sure, the last one is the Noctilux because the image detail is narrower. And which of the other two is the cheaper Panasonic? Which is the Leica Summilux-SL?

I claim that you only see the difference when you zoom in. About that in a moment. But even when magnified, the differences are marginal. However, the Panasonic Lumix S Pro 1:1.4/50mm buys the impression of higher sharpness through higher contrast. That is neither bad nor reprehensible. Leica does the same with the Summicron-SL lenses. Since the Panasonic lens is “Certified by Leica”, I can only assume that it is an update of the slightly older Summilux-SL lens. This would also explain the slightly smaller design with the same light intensity. In fact, the Panasonic Lumix S Pro 1:1.4/50mm has 13 lenses with two aspherical and 3 ED (extra low dispersion), the Leica Summilux-SL 1:1.4/50mm Asp has 11 lenses with four aspherical.

Back to the comparison: look at the pictures in detail. I have adjusted the slightly different angle of view of the Noctilux here.

Let’s start with the last image: the Noctilux naturally has the softest bokeh because of its open aperture of 0.95 and the fiercest colour fringes on the lamp stems. It is just an extreme lens, and the exact representation of objects is not one of its first areas of application. I still won’t give it away 😉

Before you decide: look at the last example. I’ll show you the corresponding enlargements of a much larger picture in a moment – please excuse the shift in the light and dark of the background and ignore it. But please enlarge the pictures by clicking on them.

Seriously now, all three lenses produce beautiful images and captivate with a great drawing. Can you see which picture was taken with which lens? You can also see that even with precisely the same white balance, the colours are slightly different. The final difference these lenses make in the finished image.

Are there any other differences that have nothing to do with the final result? Yes, weight, size and close focusing distance differ. In terms of weight and size, the Noctilux is ahead because it has no autofocus. Among the AF lenses, the Panasonic Lumix S Pro without a lens hood weighs 959g on my coffee scale, while the Summilux-SL weighs 1098g. Neither are lightweights, but the Summilux-SL is superbly balanced in the hand. For this, the Panasonic Lumix S Pro has a quick mechanism to focus manually. The Panasonic Lumix S Pro has the best close focusing distance at 44cm, while the Leica Summilux-SL focuses from 60cm. The Noctilux is designed for the rangefinder and is therefore only sharp from 1m.

And? Is twice as expensive now twice as good? I would say no, mainly due to the outstanding qualities of the Panasonic Lumix S Pro 1:1.4/50mm lens. Nevertheless, I love the drawing from the Leica Summilux-SL 50mm f / 1.4 Asph. and how well it fits in hand.